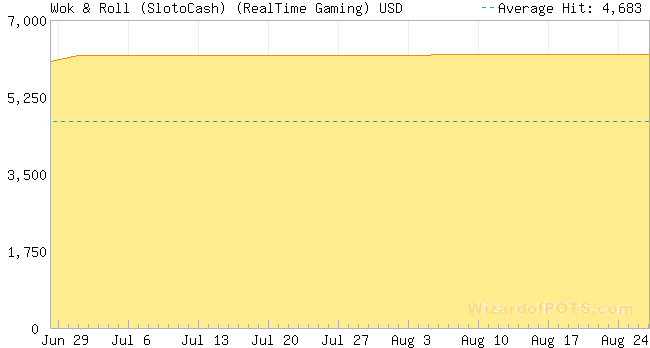 Wok & Roll is a 5-reel, 25 payline slot game with two random progressive jackpots. The game with a particular jackpot should be played at the corresponding online casino (see links).

The Chef and the Extra Wild Symbol serve as a substitute symbols in a winning combination except for scattered Wok & Roll symbols.

Wok & Feature
3 or more scattered Wok & Roll appearing anywhere will trigger the Wok & Feature during which 10 free games are awarded with a game multiplier of up to 10x!

Chef Feature
3 or more scattered Chefs appearing anywhere will trigger the Chef Feature during which 12 free games are awarded. An Extra Wild symbol may appear during free spins and it will substitute for any other symbol in a winning combination except scattered Wok & Roll. The Extra Wild symbols will double prizes every time it serves as a substitute in a winning combo. 5 extra games are awarded every time 3 or more Chefs or Extra Wilds appear anywhere during free games.

2 Random Progressive Jackpots
Any of the 2 Progressive Jackpots can be won at the conclusion of any game at random and is paid regardless of the denomination played. However, the higher your bet amount per spin, the better your chances of hitting the jackpot.