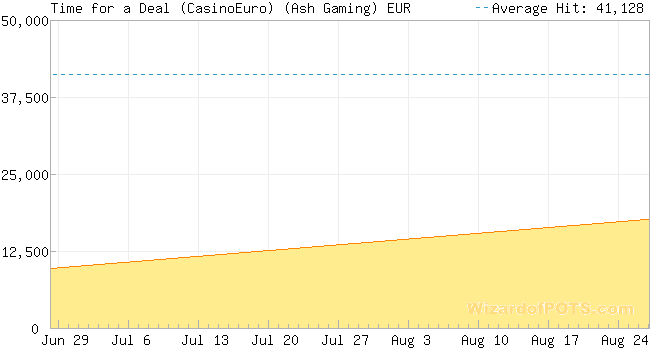 Time for a Deal is a 5-reel, 25-payline slot machine based on television game shows. Roger is the name of the host who stands to the right of the reels, offering supportive but incoherent comments when you land a win.

The Time For A Deal logo is wild symbol. There is a purple-haired girl scatter symbol and Roger is another scatter which triggers the bonus feature.

The Big Deal Bonus
The purple-haired girl scatter anywhere on reels 1, 3 and 5, activates the bonus round. Roger will now show you 3 doors, behind which are one gold coin and two silver ones. Pick a door to win one of these coins  silver will win you one spin on 3 reels on the Big Deal slot machine and gold will award you one spin on 5 reels. All reels contain prize multipliers for you.

Progressive Jackpot
The progressive jackpot can also be won in the Big Deal Bonus game  if you find 3 gold coins on your reels, you`ll win the amount shown in the box above the reels.

Free Spins
Land the Roger scatter symbol anywhere on reels 2, 3 and 4 to trigger free spin feature and pick one of the green stars to act as a wild, one of the yellow crossed to find a multiplier and one of the red arrows to determine the number of free spins to play.

Reel Or Deal
This is a randomly occurring prize during normal gameplay. Roger offers you a guaranteed reel win or a cash prize  you can`t lose out here, just pick one for a win.

Time for a Deal Slot Game