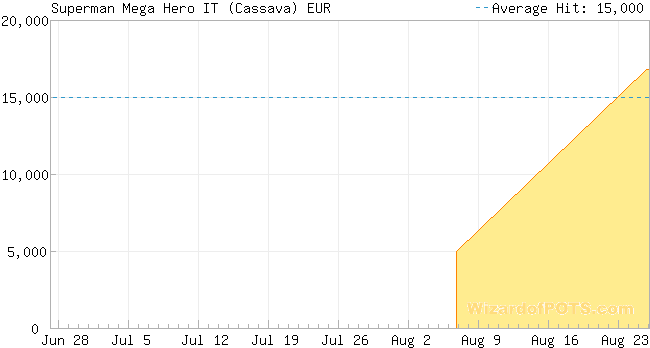 The Superman slot has 5 reels and 25 paylines where you can match the symbols to strike winning combos. Look out for Superman`s arch nemesis Lex Luther, menacing green Kryptonite - the hero`s only weakness! - and the iconic glasses he dons as alter ego Clark Kent, among many other exciting symbols!

Is it a bird? Is it a plane? It`s Superman flying in fast & furious to KAPOW the evil Lex Luther. Superman is the Wild symbol and x5 wilds pay £//$5,000; the Superman symbol is the Scatter and 3 or more of them trigger the Bonus game. Enjoy superhero-sized fighting power with multiple random Marvel Jackpots!

Wonder Woman
Wonder Woman is back in her very own video slots game! Get ready for Marvel jackpot madness as this famed DC Comics character blazes a trail across 5 spinning reels and 9 paylines. Wonder Woman is champion of peace but she takes no nonsense from the bad guys. Spin away with Wonder Woman and collect your rightful bounty!

Enter Lex Luthors Arctic Lair
Activate the bonus feature with 3 Superman logo scatters to enter Lex Luthors Arctic Lair where he has trapped hostages in one of 3 vaults. Choose between the different vaults and blast one open with Supermans heat vision! Release the hostages for free games and a Multiplier! But wait, what about the hostages in the other vaults? Will you take the prizes from the first vault, or will you risk it to defend Truth, Justice and the American-way by choosing another door?

Random Marvel Progressive Jackpots
The game offers 3 progressive jackpots that can be hit at random, on any spin. Upon a completion of any paid spin you have a chance to win one of the 3 jackpots: Mega Hero, Super Hero or Hero. The bigger your stake the more chances you have of winning bigger jackpots.