Connected Jackpots of Santa Strikes Back 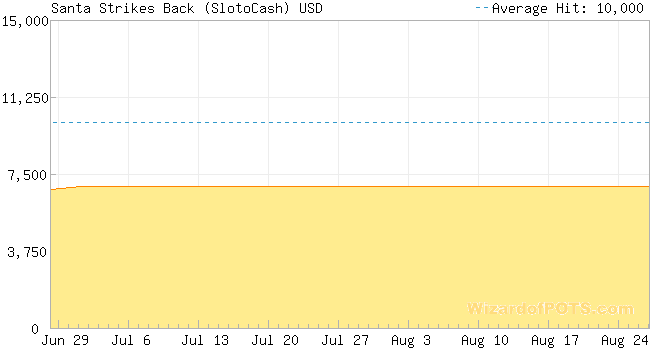 Santa Strikes Back is a 5-reel, 25 payline slot game with a random progressive jackpot. The game with a particular jackpot should be played at the corresponding online casino (see links).

Santa`s got his bag of tricks ready to go wild and fight the mighty Rudolph. Along his team featuring Mrs. Claus, Elf`s and Poisonous Gifts, it`s payback time at the Northern Pole. Hope inside his caravan of winter madness and enjoy an adventure of epic proportions.

Santa is Wild and substitutes for all other symbols except 2 Scatters - Victorious Santa and Victorious Rudolph.

Santa Strikes Back! Feature
The Feature is triggered if Santa is victorious in 3 or more scatter battles after a spin. 7 free games are awarded with an initial prize multiplier of 1. During the feature Santa and Rudolph symbols have a background Candy Cane symbol. When a Candy Cane symbol appears on a reel it will light the Star at the top of that reel. Lighting all 5 Stars will reset the number of free games remaining to 7 and increase the free games prize multiplier by 1. Stars remain lit until a reset occurs or the feature ends. The feature can reset up to 19 times.

Random Progressive Jackpot
A Progressive Jackpot can be won when 5 Santa symbols appear on an active payline. So, activate all 25 lines each spin to get the best odds. The higher your bet amount per spin, the better your chances of hitting the jackpot with a minimum value of $5,000.