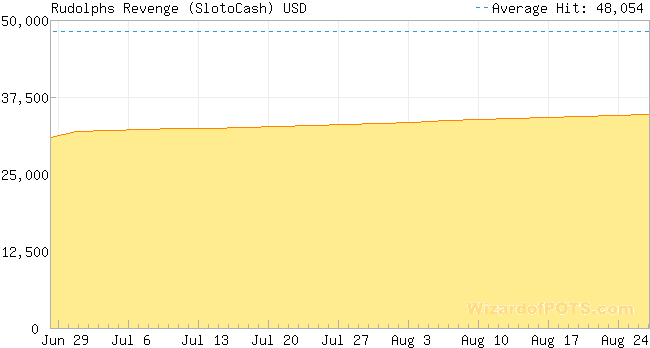 Rudolphs Revenge is a 5-reel, 50 payline slot game with a random progressive jackpot. The game with a particular jackpot should be played at the corresponding online casino (see links).

The lovers of online slots will definitely find something interesting in this game that is called Rudolph`s Revenge. Rudolph is angry and wants to take revenge on Santa for being called a red-nosed reindeer. The reindeer is ready with a baseball bat and conspires to gift a bomb to Santa. You can be a part of this fun-filled confrontation.

No matter whose side you take, either Rudolph or Santa, the game promises many many free spins, cool rewards and cash prizes including a random jackpot. Rudolph`s Revenge is a 5 reel and 50 payline slot game based on this sub-plot revolving around Christmas.

The game starts with a default setting of a compulsory bet of $2 or $0.04 on each of the 50 lines. With 5 Rudolph`s symbols on a payline, Rudolph`s Revenge offers an exclusive jackpot reward.

The funny image of the red nosed Rudolph and symbols of a bomb, Santa , Frozen Gnome, Gagged Gnome, an Igloo and other Christmas gifts combine to give different winning patterns. Start playing the game to unveil surprises and walk away with prizes and rewards won on the paylines of the game.

Random Progressive Jackpot
A Progressive Jackpot can be won at the conclusion of any game at random and is paid regardless of the denomination played. However, the higher your bet amount per spin, the better your chances of hitting the jackpot with a minimum value of $20,000.