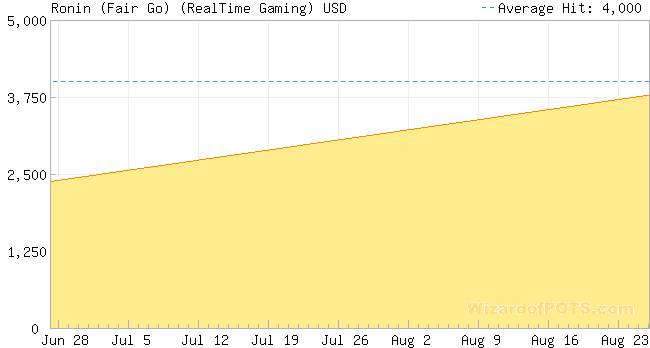 Ronin is a great Samurai-themed video slot with 20 paylines, scatter symbol, 2 wilds and 3 bonus features with free spins and re-spins gallore. The game with the current jackpots can be played at Fair Go only.

Scatter
The Ronin symbol is the Scatter. Scatter wins are multiplied by total spin bet.

Win One of 3 Features:
One of 3 features is triggered when the Koku appears on reel 3 with 2 or more Ronin anywhere on the reels.

Re-spin Feature
Reel 3 is held, with Koku appearing on all positions, while the other reels re-spin from 3 to 10 times. 2 or more Ronin appearing anywhere on a re-spin awards an extra 3 to 10 re-spins.

Free Games Feature 1
5 free games are awarded, during which prizes are multiplied by 1x in the first game, 2x in the second, 3x in the third and so on. Any retrigger will award 5 extra free spins. The feature can only retrigger once, and will result in the prize multiplier continuing to accrue.

Random Progressive Jackpot
A Progressive Jackpot can be won at the conclusion of any game at random and is paid regardless of the bet placed. However, the higher your bet amount per spin, the better your chances of hitting the jackpot.