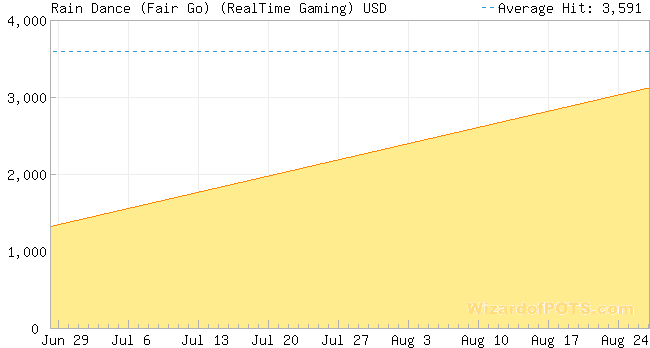 Rain Dance is a 5 reel, 20 payline slot game with 2 Bonus Features, Wild and Scatter symbols and Random Jackpot. Animated Chief is a Wild symbol and Howling Coyote is a Scatter. The Indian Chief only appears on reel 1 and 5. The game with the current jackpot can be played at Bovada Casino only.

You may know the native peoples of the American West are called upon spirits to work in their favor. Wishes for favorable weather, a good hunt, or even good luck were offered up to the spirits that rule the winds of chance in prayer, sacrifice, song and dance. Beat your own drum to stir the lucky spirits to smile upon you in the Rain Dance video slot.

Free Spin Feature
With 3, 4 or 5 scattered Howling Coyotes, you will be awarded 10, 15, or 100 free games, respectively. Free game prizes are multiplied by 3 to 5, according to the number of scattered Coyotes triggering the feature. The re-spin feature can be won during free games. 3 or more scattered Coyotes occurring after a re-spin awards the same number of additional free spins as the original trigger.

Re-Spin Feature
A re-spin feature is triggered when 2 or more scattered Howling Coyotes or/and Indian Chief appear anywhere on the reels. After pays are awarded, reels with a scatter Coyote are held while the other reels re-spin once. Scatter pays are awarded again after the re-spin. If 5 scattered Coyotes trigger the re-spin, all reels re-spin to the triggering position.

Random Progressive Jackpot
A Progressive Jackpot can be won at the conclusion of any game at random and is paid regardless of the bet placed. However, the higher your bet amount per spin, the better your chances of hitting the jackpot.