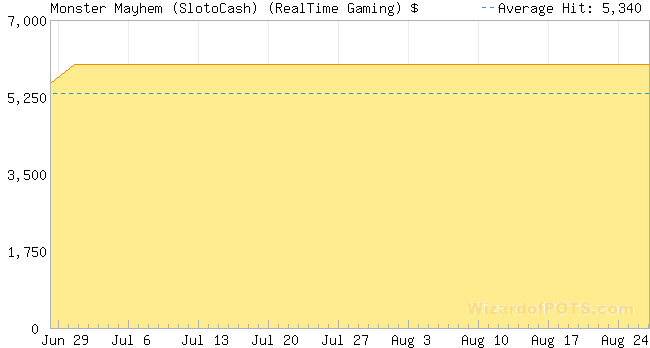 Monster Mayhem is a 5-reel, 50 payline slot game with 2 random progressive jackpots. The game with a particular jackpot should be played at the corresponding online casino (see links).

The City is the scatter symbol and if they appear, you`ll win. All symbols pay Left to Right except scattered Cities, which pay any.

Wilds: The 2 Monsters creating Mayhem are named Smash and Crash and they are the wild symbols. These Monsters substitute for all other symbols including scattered Cities.

Monster Mayhem Feature
Reveal a `Smash` icon anywhere on reel 1 and the `Crash` icon anywhere on reel 5 and you`ll trigger the Monster Mayhem Feature, during this time reel 1 and 5 are held and the other reels re-spin up to 10 times. During these re-spins, prizes can be multiplied up to 10x times, guaranteeing payouts as enormous as the monsters that are featured in this entertaining slot.