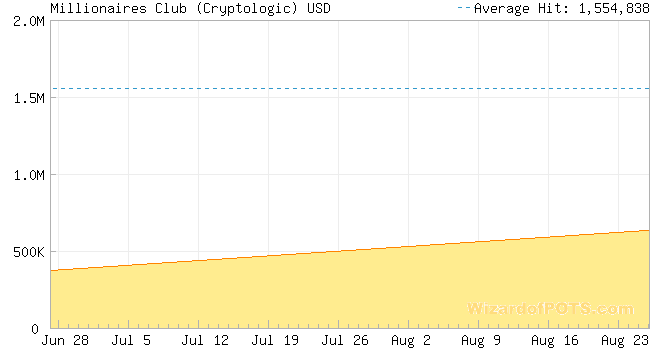 Powered by CryptoLogic software, Millionaires Club has animated theme screens and realistic sound (has optional Sound, Voice and Animation feature). The top prize in the base game of the classic slot is not so great but it can reach 1,500 coins for triple Diamonds combination on the pay-line. Other winning symbols are yachts, watches, Lamborghinis and horseshoes. Although Millionaires Club is not only a progressive jackpot game, you must play the maximum bet per spin to have a chance of winning the progressive (to qualify for the bonus round where the jackpot is available). Each coin has $0.25 - $5 value and you can play maximum 3 coins per spin.

A Bonus Round is triggered if the Millionaires Club symbol appears anywhere on the three reels. The bonus wheel will spin automatically and the Outer wheel will spin first. If the wheel lands on a number, the player wins this amount in chips (credits). If the bonus wheel lands on an arrow, the middle wheel begins to spin. If the player then lands on an arrow, the inner wheel begins spinning. 3 Arrows win you the Millionaires Club progressive jackpot prize. Minimum initial value of the progressive jackpot is £ / € / $175,000.

This new game is highly recommended if you are looking for some really large winnings because the jackpot is often exceed $1 million. Millionaires Club is a great looking online slot machine and is just as entertaining to play.

The largest Millionaires Club progressive jackpot of over $8 Million was hit by InterCasino`s player "Obaesso", a factory worker from UK, on May 15th, 2007. That was the world record for the largest ever online jackpot win. Another winner Jon R. has scooped approximately $1.77 million in December 2005. The biggest UK Pound denominated jackpot of £436,150.21 was won by British player Fenton in William Hill online casino on April 29, 2004. See all Millionaires Club`s winners and their stories and testimonials here. The winners tell it all.

Payout table based on the $1 coin size: