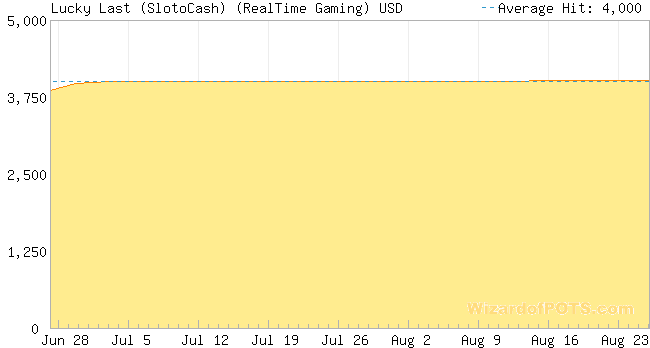 Lucky Last is an Irish-themed, 5 reel, 25 payline slot machine game with animating Wild and Scatter symbols, free spin bonus feature and 2 random progressive jackpots. The game with a particular jackpot should be played at the corresponding online casino (see links).

The luck of the Irish shines upon you in the Lucky Last - a fabulous new Leprechaun-themed slot machine from Real Time Gaming. Gold Coins are grouped wilds on reels 1 and 5 that count for all other symbols except scattered Shamrocks, and double the prize if they appear in a winning combination.

Wild: The Gold Coin is a Wild symbol that only appears on reels 1 and 5 and substitutes for all symbols except the scattered Shamrock. The prize is doubled (2x multiplier) if one or two Coins appear in a winning combo.

Scatter: The Shamrock is a Scatter symbol. 2 or more scatters anywhere on the reels pay a cash prize from 1x to 200x total bet. Scatter wins are multiplied by total bet.

The other paying symbols on the reels are Leprechaun, Pot of Gold, Rainbow, Boots, Pipe, Horseshoe, Mushroom and three types of coloured Sevens symbols. Players can choose coin denominations from $0.01 up to $5.00 that results in up to $125 bet per spin.

Win Up To 35 Free Spins!
7 free spins are awarded when one or more Gold Coins appear on both reels 1 and 5. The bonus feature can only be retriggered on the last game of each free spin series. The last free spin has a 50% chance of retriggering the feature, so you can win a new series of 7 free games, up to 5 times in a row! And if that pot of gold isn`t enough, all prizes are tripled in the first 6 games of each series, and doubled in the 7th.

Multiple Random Jackpots
The new attribute adds two independently driven progressive jackpots to the slot. Major and minor jackpots increase in value with every bet until they are hit, and neither have an upper limit. Once won, the major jackpot resets to $1,000.00 minimum; and the minor jackpot resets to $250.00 seed. Both jackpots are triggered at random, regardless of your coin denomination and lines selected, and independent from each other.