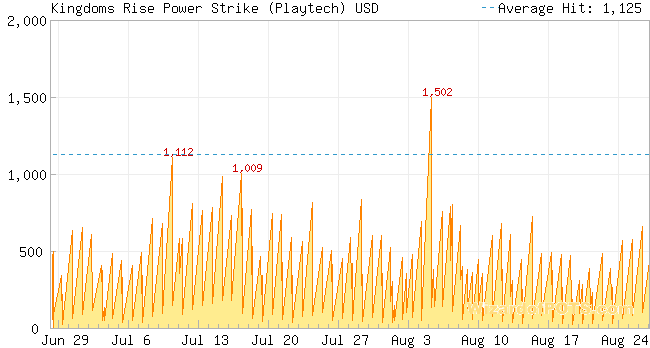 Kingdoms Rise is a series of 3 progressive jackpots, available on 2 video slot from Playtech: Kingdoms Rise: Sands of Fury and Kingdoms Rise: Forbidden Forest. The first slot has 5 reel and 20 payline format, while the second one offers 576 ways to win. In a Wild Fury feature you get locked wilds for the next spin - there’s also respins to be won with all character wilds locking to the reels.

Character wilds & Wild Fury feature (Sands of Fury)
The main symbols are the Gladiator, the Sorcerer, the Queen, the Reptile, and the Warrior. These tough adversaries are worth as much as 150 times your wager when they fill up a payline. Each character can also appear as a wild (Character Wilds), which raises their amount to 250 coins in each case. When a character wild symbol lands on the reels, the Wild Fury feature is activated. 1 feature position appears above the reels for each character (warrior above 1, general above reel 2, queen above reel 3, sorcerer above reel 4 and reptile above reel 5.

Kingdoms Rise shop
Tokens can appear from the symbols when you play – these are collected and can be used in the Kingdoms Rise Shop. Collect 500 tokens to use them. With tokens, you can opt for the Wild Beast Respins feature where you can get up to 5 respins with 3, 4 or 5 locked character wilds for your tokens.

You can also opt to purchase The Queen’s Ritual Bonus feature – for 300 tokens, you get 3 picks for cash prizes, while 1,500 tokens award 5 picks with cash prizes, extra picks and 2 multipliers.

Kingdoms Rise Progressive Jackpots
You can win one of 3 progressive jackpots – known as the Kingdoms Rise Jackpot feature, you can win these jackpots randomly on every spin. The Daily Strike Jackpot has to be won by a certain time each day with the Power Strike Jackpot guaranteed to payout before it reaches the displayed amount. The one you want is the Epic Jackpot which can increase infinitely.

The RTP on Kingdoms Rise: Sands of Fury is 96.23% of which 0.99% is contributing to the jackpots and 3% are reserved for the Kingdoms Rise Tokens. Kingdoms Rise: Forbidden Forest has a slightly lower RTP of 95.99%.