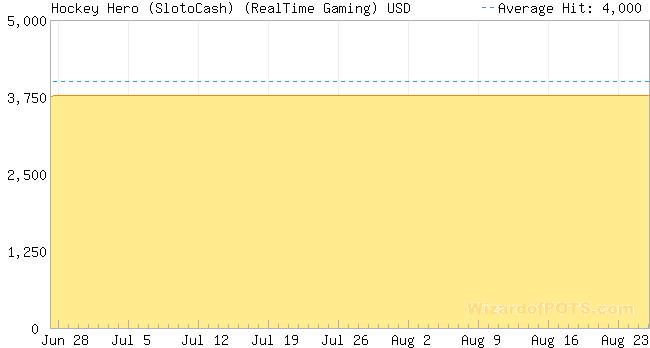 Hockey Hero is a 5-reel, 40 payline slot game with a random progressive jackpot. The game with a particular jackpot should be played at the corresponding online casino (see links).

When the game is on the line, do you have what it takes to step up and score the big goal? It`s winner takes all in the awesome new 40-payline Hockey Hero slot machine by Push Gaming! Go for gold with stacked high paying players and wild trophy combos. Big win opportunities abound with the exciting new re-spin feature. Will you be crowned the Hockey Hero?

With modern day hockey stars like Sidney Crosby, Alexander Ovechkin and Connor McDavid, it comes as no surprise that we get a stellar hockey slot. Players in hockey mad countries like Canada, Sweden, Finland and Russia, you`re going to love this game. Just as in the big game itself, this nail-biting game has you competing to become crowned the Hockey Hero. The graphics are fun and feature symbols like a Stanley Cup replica, three stacked player symbols, a puck, skates, helmet and more. So hit the ice running and score the game winner in Hockey Hero!

Cup Wilds: The golden cup that looks a lot like the Stanley Cup is the games wild symbol. It will substitute for all symbols in the game except the goal symbol to complete wins.

Free Spins Feature
The Hockey Goal symbol is the scatter symbol and landing three or more anywhere on the reels will trigger the free games round. You will be awarded 5 free games with a randomly selected multiplier applied to all wins. The Goal symbol does not appear during free games.

Hold and Re-Spin Feature
When the first reel is completely filled with the Red, Blue or Green player, the Hold and Re-spin feature is triggered. You will win one free spin with that player remaining on the first reel.

Random Progressive Jackpots
Any of the 2 Progressive Jackpots can be won at the conclusion of any game at random and is paid regardless of the denomination played. However, the higher your bet amount per spin, the better your chances of hitting the jackpot.