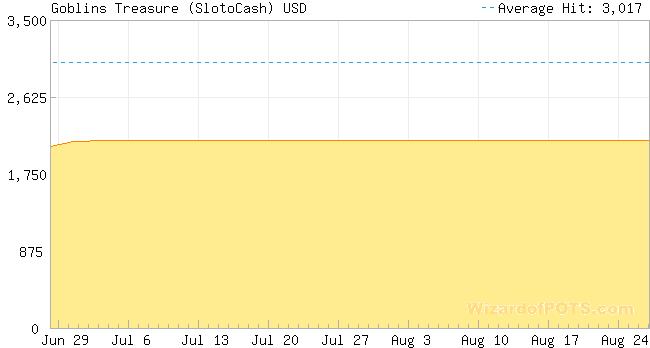 Goblins Treasure is a 5-reel, 25 payline slot game with 6 Wild and 1 Scatter animating symbols, Win-Win feature, free spins and 2 random progressive jackpots. The game with a particular jackpot should be played at the corresponding online casino (see links).

Dragons, giants and dastardly goblins await in this riotous new slot from Real Time Gaming! With up to a stunning 25x pays in the feature a fortune in gold beckons.

Scatter: The Goblin Castle is a Scatter symbol. 2 or more scatter Goblin Castle symbols anywhere on the reels pay a prize from 2x to 200x total bet.

The other paying symbols on the reels include Armour, Mushrooms, Book, 3 types of Gems, Monsters symbols. Players can choose coin denominations from the range of $0.01 up to $5.00 per each line that results in up to $125.00 max bet a spin.

The top non-progressive jackpot of 10,000 coins or up to €/$50,000 in currency can be won if you hit 4 Monsters with one wild Goblin symbol on activated playline in the base game. Payout table contains a total of over 40 winning combinations because some symbols can be combined and substituted by Goblin to create extra wins.

Free Spin Feature
15 free spins are awarded when a Goblin appears anywhere on reel #1 with the Treasure Chest anywhere on reel 35, during the base game. The number of Goblins in the triggering Goblin symbol is the free game multiplier (from 1x to 5x) used in the free spin feature. Any retrigger combination appearing during free games adds 10 extra spins to the current feature.

Multiple Random Jackpots
The new attribute adds two progressive jackpots to the slot. Major and minor jackpots increase in value with every bet of the players, and neither have an upper limit. Once won, the major jackpot resets to $1,000.00 min; and the minor jackpot resets to $250.00 seed. Both jackpots are triggered at random, regardless of the coin denomination and lines selected, and independent from each other.

The unique Win-Win feature ensures that even the smallest bonus feature wins will be transformed into a worthy cash prize, and 2 random jackpots can add an extra cash to your balance. Spin the slot now and you`ll have a chance to steal the real treasure trove!