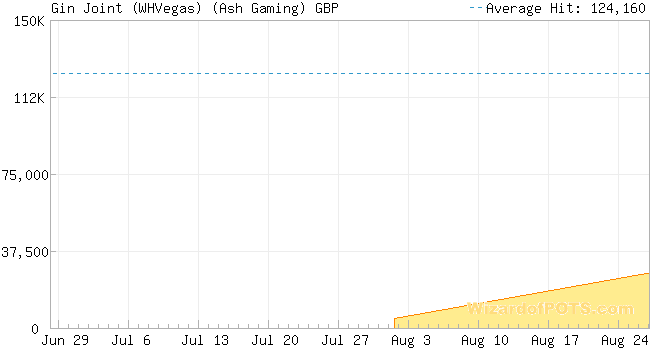 Gin Joint Jackpot is a 5-reel, 20-payline slot machine game based on a 1920s gangster theme. The slot features a Progressive Jackpot in the Shootout bonus round, an in-reel shoot-the-henchman Gunfight bonus, `Gamble Win` option, and a scatter icon which gives access to the additional Booze Bustin` bonus game.

Shootout Bonus Round and Progressive Jackpot
The bonus round scene is in a bar. Shoot as many Henchman as you can and win a cash reward for each one you shoot. You have 2 options - play the game yourself in `Manual Fire` mode, where you must click on the screen wherever the henchman appear in order to take them out, or play in `Auto Fire` mode, where the Detective will do the shooting for you.

Each time a henchman runs across the screen or pops up to take a shot at you from any other hiding place, you must click anywhere on the henchman`s body or gun to shoot him. For each henchman you shoot, you get a cash reward. You have unlimited bullets, but only 6 bullets available at a time, after which the game will automatically re-load your gun for you. You cannot fire while it is re-loading. Shoot henchmen before the Big Boss shows up and challenges you to a Shootout. How long he takes to show up will vary from game to game.

To play in `Auto Fire` mode, press the `Auto Fire` button, and just sit back and watch as the Detective cleans up the town! He`ll do his best to get as many henchman as he can.

Progressive: At the end of the shoot-out, the game will move on to the car chase scene. Just watch as the detective takes on the Big Boss and catches him and wait to see what`s in his truck. You`ll score a cash reward for the Barrels he has. If there are 3 barrels in the truck, you win the Progressive Jackpot.

Booze Bustin` Bonus Game
If 3 or more Officer symbols appear as a scatter on the reels, you`ll enter the Booze Bustin` bonus. According to whether you had 3, 4 or 5 symbols, you`ll get 3, 4 or 5 attempts to find booze. You must select a square on the map grid where you want the Officer to drive to. He will search in that area, and you`ll receive an award if that area contained illicit booze. If you don`t find any alcohol you win nothing for that attempt.