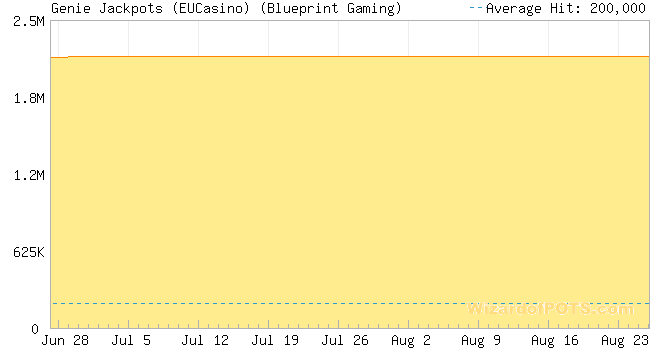 Genie Jackpots is a 5-reel 20-line slot with an Arabian Genie theme. The game has 2 exciting features as well as 3 Wishes Power Spin!

Mystery Win Bonus
Get 2 Bonus Scatter symbols on reels 1 and 3 and a Chest Scatter on reel 5 in order to start the Mystery Win Bonus. The Genie will appear in his treasure room next to a large treasure chest. The Genie will hit the chest with his Magic Mallet, awarding you a cash prize. You will then be prompted to pick one of 3 lamps. Reveal the Genie and he hits the chest again to award further prizes. The feature continues until COLLECT is revealed from a lamp where you are awarded the amount displayed in the Bonus Win panel.

Magic Carpet Bonus
Achieving 2 Bonus Scatters on reels 1 and 3 and a Magic Carpet Scatter on reel 5 will start the Magic Carpet Bonus. Select a lamp to move along the trail. Reveal a special Genie icon to be magically transported to a random position in front of you on the trail. Reach the Cloud with the Silver Lining to enter Big Money where you can win up to 1000x your stake.

3 Wishes Power Spins
The Genie appearing from the lamp during any game triggers a 3 Wishes Power Spin. Select a Magic Lamp to reveal your wish. Look out for the Infectious Monkey Wilds that can jump out of the symbol and turn any symbol next to it WILD. Reveal the special GENIE WILDS which can turn any position on the reels WILD, double your win and respin the reels for up to 2 big Winning Spins!
SHAZAAAAM!