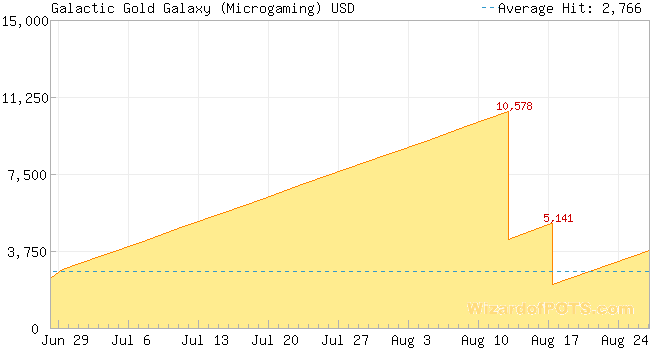 Galactic Gold is a new slots game with 5 reels and 25 paylines, wild & scatter symbols, free spins bonus, and 4 progressive jackpots. Released by Microgaming in collaboration with Aurum Signature Studios, this ‘out of this world’ game features an immersive plot, imaginative characters, and visually stunning graphics. Coins start at just 0.01 on the 25 paylines, so you can bet from 0.25 up to 6.25 credits per spin.

The highest paying symbols include the crew aboard The Goldhunter: Roscoe “Digger” Townsend, Nova Nightshade, Arthur “Silver Tongue” Baker, and Little Nicky Powers, as well as the villain, Shayde Grimm. Galactic Gold slot also has a Wild and Scatter symbols.

Free Spins Galore
3 or more Scatter symbols anywhere on the reels will trigger a Free Spins feature. The background of the game is set in outer space, and players will be taken to a new screen, with the planet Aerius as the backdrop. With so much excitement happening on the reels, it’s potentially possible to win up to 12,000 credits.

4 Progressive Jackpots
The bonus wheel can appear at random during any base slot spin, with 4 possible jackpots up for grabs. Players will simply need to spin the wheel, which will land on one of the following four progressive jackpots: The Gold jackpot is seeded at 10 credits, with the Grand and Galaxy jackpots giving away from 100 and 1,000 credits respectively, while the Galactic jackpot is worth at least 10,000 credits (currency equivalent payout).When that random bonus game triggers, you are guaranteed to win one of the progressive jackpot prizes!Of course, the smaller prizes will pay out a lot more often than the biggest ones, but any prize is worth winning. Unfortunetly, the overall RTP of the game is relatively low: 88.12%.