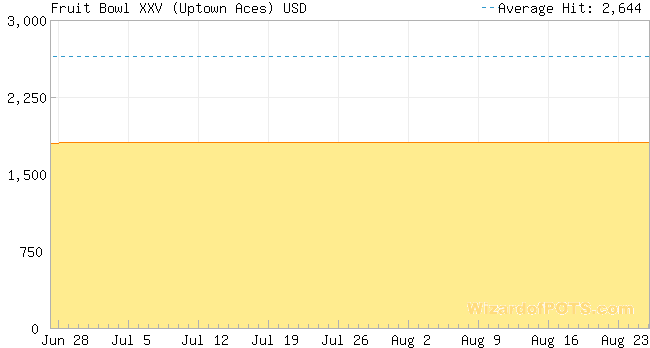 It`s game time! The stands are full, the crowds are cheering and the hotdogs are selling fast. Football season is here and the mighty grapes are going to take it all the way! Fruit Bowl XXV slot features a hilarious mini-game triggered by spinning 3 or more scattered game logos. You`ll duck, dodge and dive your way around some fierce pineapple opponents as you try to score a touchdown and win yourself up to 25 free games at x5 multiplier!

Wild: The Grape symbol is wild and substitutes for all other symbols except scattered "Fruit Bowl XXV."

Scatter: The Fruit Bowl XXV is a Scatter symbol. 3 or more scatter Fruit Bowl XXV symbols anywhere on the reels pay a prize from 3x to 200x total bet.

The other paying symbols on the reels depicts football related characters including Field, Fruit Players, Ball, Cap, Cup, Tickets and Fans symbols. Players can choose coin denominations from the range of $0.01 up to $5.00 per line that results in up to $125.00 max bet per spin.

The highest non-progressive jackpot of 7,500 coins or up to €/$37,500 in currency is won if you hit 5 Grapes on a playing line in the base game. Payout table contains over 44 winning combinations because several types of symbols can be combined and substituted by Grape to create extra combos.

Fruit Bowl Free Spin Feature
The "Fruit Bowl" Feature is triggered when 3 or more scattered "Fruit Bowl XXV" logo symbols appear on a base game. The football field is revealed. 5 free spins at a multiplier of x1 are initially awarded. The player tries to bypass up to 4 opponents in succession on the way to a touchdown. The player selects a movement choice versus each opponent in turn. Each opponent evaded awards 5 extra free spins and a chance that the free games multiplier increases by 1. If the player is tackled the bonus feature ends. Any retrigger will add 5 free spins.

The unique Win-Win feature ensures that even the smallest bonus feature wins will be transformed into a worthy cash prize, and 2 random jackpots increase in value with every bet until they are won. Join the whacky fruit fans in this new online slot machine and cheerleading blueberries and get yourself into the game with Fruit Bowl XXV!