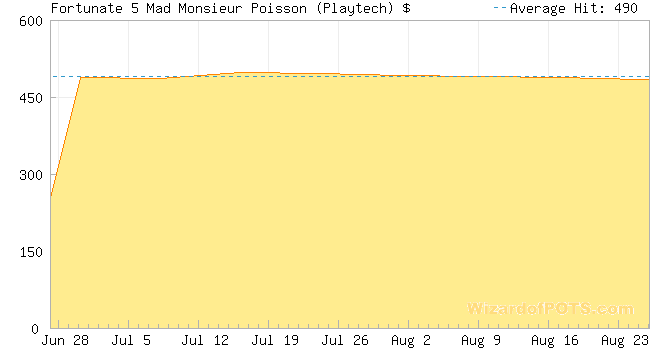 Fortunate 5 is a pirate-themed video slot with 5 reels, 15 paylines, two bonus features and 5 progressive jackpots. All the action takes place on a pirate ship "The Golden Wench" with blue skies and tropical islands in the background.

The Golden Wench is the wild symbol and it appears only on reels 2, 3 and 4, substituting for all others except the red skull and cross-swords scatter.

2nd Chance Re-Spin Feature
If you get 4 of the same pirate symbols on an active payline, the 2nd Chance Re-Spin is triggered giving you another chance to get a 5 of a kind winning combination. This feature only appears on the last (5th reel) by the way.

Wild Waters Free Games & Wild Storm Super Spin
The Free Games feature is triggered when you get 3 "skull and cross-swords" scatter symbols anywhere on the reels. You will win unlimited free spins. Look out for the Wild symbol (pirate ship) as these are collected as you play the feature.

When you have 5 Wilds, the Wild Storm Super Spin begins - all the pirate ship symbols are then randomly distributed on the reels and freeze in place for 1 spin.

Progressive Jackpots
There are 5 main character symbols, each linked to one of the progressive jackpots: Peg Leg Davis, Mad Dog McDougall, Captain Redbeard, Starboard Mary and Monsieur Poisson. The jackpot values differ for 4 different coin denominations. We track largest 3 out of the 5 jackpots.

You must land 5 matching pirates on an active payline to win that particular jackpot amount. If you manage to land four matching characters on reels 1 to 4 you`ll trigger the 2nd Chance Re-Spin which will spin reel 5 once more to try and land the missing character. RTP of the game is 95.51%.