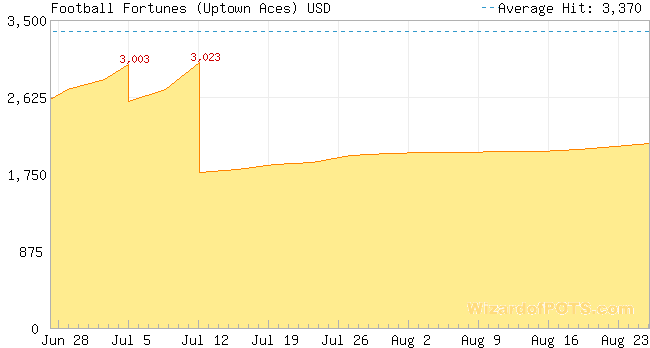 1W 2M ALL   PROBABILITY ALL MINOR

Football Fortunes is a 5 reel, 50 payline slot game with two game modes, a 50,000x top award, free spin bonus and 2 random progressive jackpots. The game with a particular jackpot should be played at the corresponding online casino (see links).

All stadiums are different, and Football Fortunes is one with a never-ending kick-off-season – a magical place to enjoy the king of sports. You can play in Rhino Mode and win up to 100 free games with prizes tripled, or you may want to try the Fortune Mode which gives you a chance of triggering 8 Free Games at the end of any normal spin!

And if extra mini ball icons appear on all 5 reels during free games, you'll be rewarded a Penalty Kick Bonus in which each successful kick awards you bigger prizes! After eight goals or two misses, you'll have a chance to kick the golden ball. Score a goal to triple your wins while also earning a chance to kick a second golden ball. If you score again, it will triple the prizes once more! Do you have what it takes to come out on top of the shootout? So, soccer fan or not, join in for matchday fun and great prizes.

2 Random Progressive Jackpots
The Progressive Jackpot can be won at the conclusion of any game at random and is paid regardless of the denomination played. However, the higher your bet amount per spin, the better your chances of hitting the pot. Minimum value is $1,000 (Major) and $250 (Minor).