Connected Jackpots of Coat of Arms 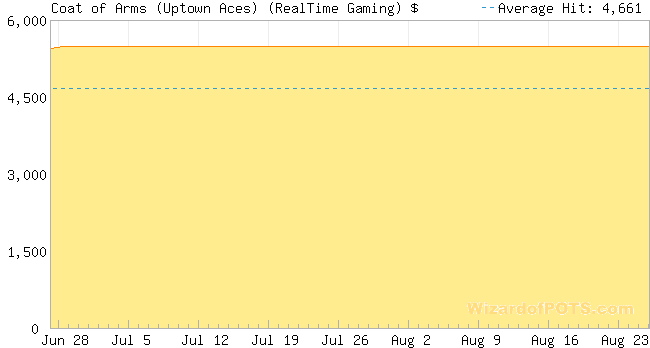 Coat of Arms is a 5-reel, 20 payline slot game with a random progressive jackpot. The game with a particular jackpot should be played at the corresponding online casino (see links).

Chivalry is not dead! Cheer on the White Knight, the Black Knight or maybe even both in Coat of Arms, the new medieval-themed slot game from Real Time Gaming. The Black Knight is Wild, and doubles the prize when he appears in a winning combo.

Free Games
2 or more Scattered White Knights from left to right will trigger a Re-spin Feature, with the remaining reels spinning up to 10 times. 15 Free Games can also be won when a bonus Golden Shield appears with symbols on reels 1, 2 and 3, with prizes up to x4.

A Bonus Crown substitute symbol is also added to reel 3, and accumulating 5 or more Crowns throughout the feature awards extra games. Long live the wins!

Random Progressive Jackpot
A Progressive Jackpot can be won at the conclusion of any game at random and is paid regardless of the denomination played. There are two jackpots with the following seeds: Major $1,000 and Minor $250. However, the higher your bet amount per spin, the better your chances of hitting the jackpot.