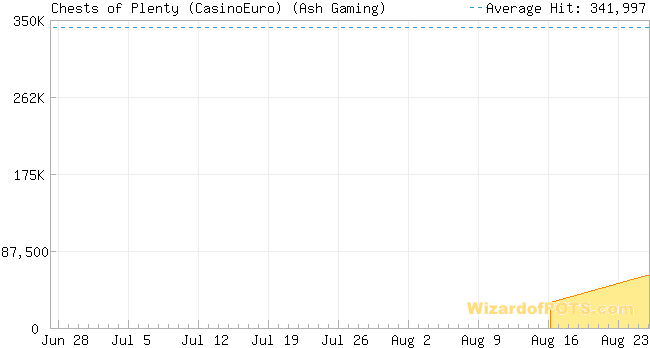 Chests of Plenty is a 5-reel, 20-payline slot machine based on a pirate theme. The game features a Progressive Jackpot in the in-reel Chest bonus round, a Treasure map bonus, as well as wild symbols and possible extra wilds. Choose your bets per line between 1p and £5 for a total bet up to £100 per spin.

Reel Gems Slot - People say Diamonds are a girl`s best friend, but if you reveal 9 Diamonds in the dazzling Jewelry Box in-reel bonus game, they`ll be your best friend too! Bring to light the Progressive Jackpot - the same as you see on Chests of Plenty slot.

In-Reel Chest Bonus
This Bonus game is a special scatter bonus win triggered by hitting 3 Chests anywhere on the reels. There is no win attached to the Chest symbols - only entry to the bonus game, which itself guarantees a win. The 3 chests will move to the middle of the screen and open up to reveal 3 gems in each chest. Getting 3 gems the same in a chest awards a coin prize. If the 3 gems in a chest are not the same then that chest will be finished and will not open any more. After all 3 chests have opened and shown gems then the chests that had a win will open and reveal 3 gems again. This will continue for each chest until it does not award a win.

Progressive Jackpot
If all 9 of the gems shown at any one point are diamonds, then you win the progressive jackpot. The bonus round will continue and you`ll still get the normal payouts for the bonus as well.

Treasure Map Bonus Round
Get 3,4 or 5 of the Map symbols scattered on the reels to start the Treasure map bonus. There are 3 different maps with increasingly higher prizes in them. If you had 3 maps then you start on the first map, if you had 4 map symbols then you start on the 2nd map and 5 maps send you to the 3rd and most rewarding map. It`s possible to go from one map up to a higher value map by collecting 3 of the maps on the reels. You cannot drop back down to the previous map.

Each map consists of a trail around an island and on that trail are coin prizes as well as blank spaces, map pieces and mystery spaces that could contain money, a map piece or nothing. There is a wheel with numbers from 1 to 7 and a "Skull and Crossbones" space. You move around the island by pressing the spin button to spin the wheel and then move that number of spaces. This continues until you spin the wheel and it lands on the "Skull and Crossbones".