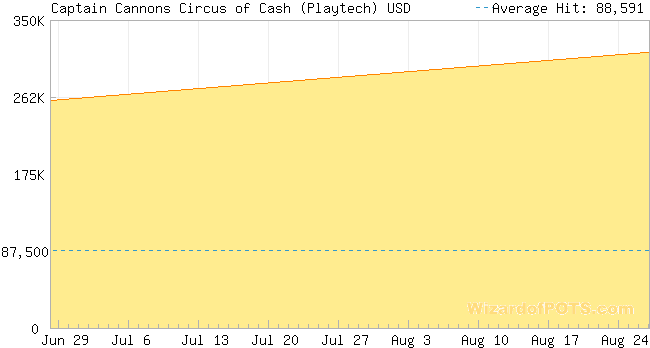 Captain Cannon`s Circus of Cash is a 5-reel, 25-payline slot machine based on a Circus theme. The slot features wilds, Free Spins, a progressive jackpot and 9 bonus rounds (3 in-reel bonus rounds, 3 "pick a win" bonuses and 3 bonus main rounds where the progressive jackpot can be triggered). Total stake can be set in the range from 25p up to £250 per spin. 25 paylines are always fixed (activated).

In-Reel Bonus Rounds
These 3 bonuses modify the reels and add new Wilds to create new line wins.
Fire Breather: A fire breather will move backwards and forwards at random along the bottom of the reels. Eventually he will stop and blow flames up over a reel, making that reel turn to all Wilds. He could turn up to 3 reels all wild.
Lion Tamer: The lion tamer appears from the side of the reels and cracks her whip. She will whip a symbol on the reels and turn it wild. She can whip 1,2,3,4 or 5 symbols but wont whip one that is already a wild.
Rampaging Elephant: An elephant will knock into the reels, one by one knocking out some of the symbols. The remaining symbols will drop to the bottom of the reels and new random symbols will drop down.

Caravan Side Show Bonuses
Each of these 3 bonus rounds is played in the Side Show Caravan and they all allow you to make different selections to pick which character/item you think will have the best win.
Bearded Lady: Once the caravan curtain has been opened 2 mysterious bearded ladies are shown. One of them has a beauty hiding behind the beard and the other one doesn`t. You need to select one of these and then that character will be shaved to show if they are the beauty or not. Afterwards the other character will also be shaved to show what you could have won if you had selected them.
Strongman Contest: 3 strongmen are flexing whilst waiting to lift their weights. You need to select 1 of the strongmen and then they`ll all start to lift their weights. As the selected character lifts his weights a prize above their head will begin to count up. The longer they keep the weight aloft the bigger the prize will get. The 3 strongmen will vary in their capabilities for lifting.
Knife Thrower: An assistant surrounded by several balloons will appear. These balloons will be hiding either cash prizes behind them or extra throws. You start with 5 throws and need to click on a balloon to select it. After each pick the knife will be thrown to pop the selected balloon and award the win shown behind.

Main Event Bonus Rounds
These are the bonus rounds that have the highest payouts on average and can win you the progressive jackpot.
Clown Car and Free Spins: A small clown car drives up into the circus arena and screeches to a halt. The clowns will come out of the car one by one - each having a balloon which has a cash prize. Pink Balloons award Free Spins, Green balloons increase your multiplier for all Free Spins wins.
Tightrope Motor Bear: A Daredevil Bear is about to ride a motorbike across a tightrope. The further he goes the more you win. Each time you press go the bear will rev the bike and move between 1 and 6 places along the trail. This will continue until the rev counter breaks and the bear has to stop. If the bear reaches the end then he will be joined by a clown on his return journey who can reach the higher cash awards.
Captain Cannon Bonus: Captain Cannon will climb into a cannon and then get fired off and collide with objects on his journey. Each object he collides with will award a prize and will also either speed him up or slow him down. Press fire when the cannon is at your chosen trajectory and then he will shoot off. Once he collides with a water barrel he comes to a complete stop and the bonus ends.