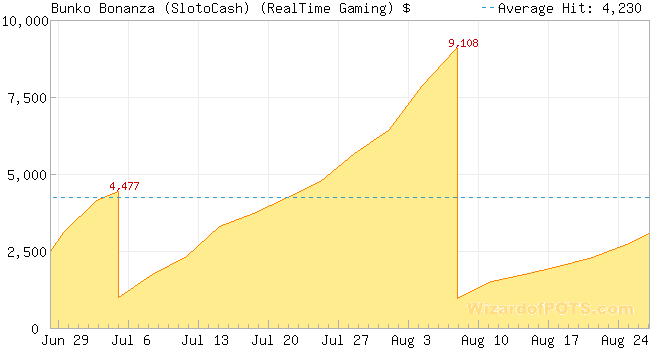 Bunko Bonanza is a 5-reel, 20 payline slot game with Wild and Scatter symbols, Free Spins and a random progressive jackpot. The game with a particular jackpot should be played at the corresponding online casino (see links).

Bunko night just got a lot more exciting with the introduction of Bunko Bonanza slot. Based on the popular dice game played by suburban housewives across America the new slot machine is full of fun and excitement. With 20 lines of payout and random jackpot you have a number of opportunities to win big. The images on the reels include Bunko Dice, Bell, Cakes, Drink, Chips, Notebook, and traditional Ace - 9 card symbols with cakes.

Animated Bell is wild and substitutes for all other symbols (except scatter) to build winning combinations. Bell also act as a x2 multiplier - it doubles the prize when it appears in a winning combo. The scatter Bunko Dice symbol is also animated and can activate 21 bonus free spins. Players can bet from $0.01 up to $100 (20 coins) per each spin and win top jackpot (maximum win other than the random Progressive Jackpot) of 1,000 coins ($5,000) per spin.

Bunko Bonanza Bonus Feature
The free spin type bonus feature is activated when 3 Bunko Dice symbols appear anywhere on the reels awarding 21 Free Games. During free spins prizes are increased either 2x, 3x, 4x, 5x, or 6x depending on the initial roll of the Bunko Dice. Additional 21 or 5 free games can be won during the free games. 21 additional free spins are awarded if the same initial Bunko Bonus number is rolled otherwise 5 additional spins are awarded. Once the multiplier is set it remains until the completion of all free spins. During free games when the Bell substitutes in a winning combination the prizes are doubled for up to a 12x multiplier! The feature can be re-triggered.