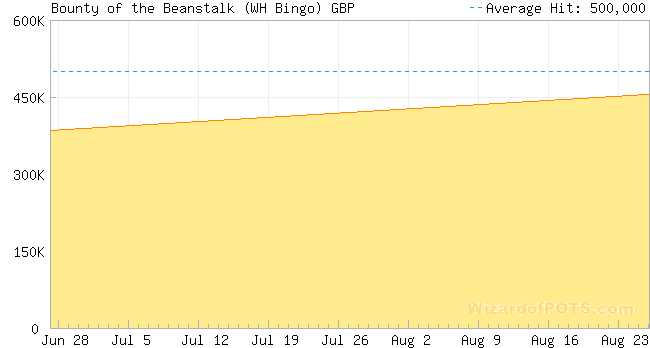 Bounty of the Beanstalk is a 5-reel, 50-payline online slot game with free spins, wild and scatter symbols, bonus feature and progressive jackpot. The reels are separated by lengths of rope and framed in wood. The four main reel symbols include the magic beans, an axe, a cow and Jacks wife.

The Bounty of the Beanstalk logo is the Wild symbol and there are 2 scatters, the giant and Jack, who each activate their respective bonus features.

Giant Free Spins
The feature is triggered by landing 3 giant symbols on reels one, three and five and you will receive 10 free spins. Jack has to escape from the giant during the free spin round. If the giant appears during this round he will chase Jack across the reels, turning up to 4 random reel positions Wild with his giant finger. These Wilds freeze for the remaining spins.

Giants Treasure Bonus & Progressive Jackpot
Jack has already made it up the beanstalk and now his task is to grab 3 pieces of treasure. You need to hit the Jack scatter icon on reels 1, 3 and 5 to trigger this bonus game and you`ll begin the chance to select from eight in from of the sleeping giant. You can continue picking symbols until the giant wakes up at which point the bonus is over.

The progressive jackpot can be won in the Giants Treasure round by finding the Golden Money Bag, the Golden Goose and the Golden Harp from your picks.

Bounty of the Beanstalk Slot