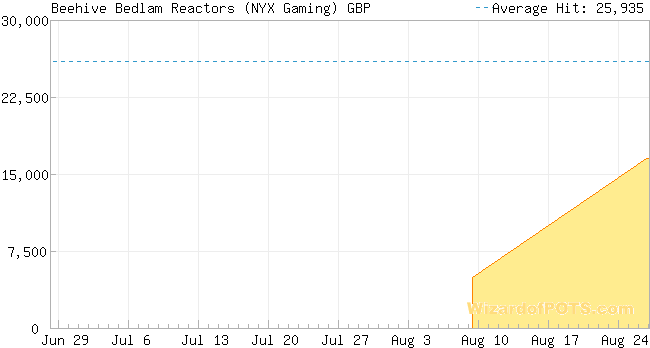 Beehive Bedlam Reactors is a reactor game with free games feature and a persistent bonus of 10 stages in 10 worlds. The game also has a progressive jackpot which can be won in the Free Falls bonus round.

The unique slot takes place in the honeycomb of a beehive, using a 7x7 reactor style reel layout. There is a pollen count tally on the right hand side that can unlock features within the game. Players can explore up to 10 different worlds in this adapted slot, including free spins and a progressive jackpot.

How to Play?
Each play creates a cascade of new symbols in the 7x7 grid. Each symbol is hexagonal in its format; the symbols have 6 active sides which react to touching symbols. Any 5 or more symbols of the same kind connecting cause them to `burst` and an award associated to that symbol (see PayTable) is paid to the player. Any burst symbols disappear and further symbols to replace the vacant areas left by those burst symbols drop vertically into place. Any further symbols 5 of a kind or more will burst and the reaction will keep going with further symbols dropping down until there are no more 5+ of a kind touching symbols.

Free Falls Feature
If 3 or more Free Falls` connect and burst during the main game play they trigger the Free Falls feature that is similar to `Free Spins` in a normal slot. This feature will be play out based upon the number of trigger symbols, triggering 8 to 15 Free Falls. Free Falls can be re-triggered.

Progressive Jackpot
At the end of Free Falls on the very last reaction bees will appear on screen and drop letters into the letter spaces spelling JACKPOT. The bees will drop letters at random. If the bees drop all 7 letters spelling JACKPOT into the spaces, the current progressive value will be awarded to you! The RTP of the slot is ranging from 92.84% to 94.37% dependant on gameplay and world progression..