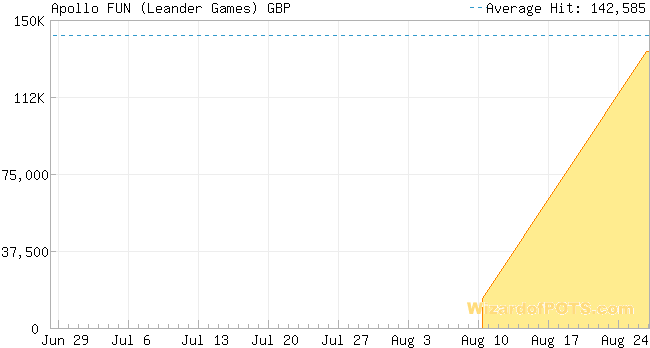 Apollo God of the Sun is an online progressive slot machine from the Leander Games. Theyve created a slot game set during the Roman Empire, with an Almighty Sun feature, 2 bonus rounds and a whopping progressive jackpot hat will continue to grow until its won. Here we show 2 jackpots, available in real money play (USD) and FUN modes.

The design of the slot is cleverly thought out and the end result is fantastic. The reels are set between 2 concrete pillars with fiery torches attached and to the left of the reels is an ancient warrior known as Apollo, standing guard. There are also ancient buildings, stone paths and an eerie looking sky in the background.

Featuring 5 reels and 20 paylines, Apollo God of the Sun slot offers minimum bet from 0.20 ncredits up to the maximum bet of 200.00. This online slot game by Leander Games has a return to player (RTP) of 97.17%. The sun is a wild symbol and substitutes for all other symbols except the bonus symbol.

Muse of Music Bonus
This Muse symbol, when landed on reels 2, 3 and 4, triggers the Muse of Music bonus in which youll pick from various coins to win up to 45x your stake.

Almighty Sun Feature
Apollo stands beside the reels, and he may unleash his power at any time! Apollo will add additional wild suns to the reels to maximise the number of winning combos youll hit. Sometimes, the God of the Sun transforms one or two entire columns into wilds!

Progressive Jackpot
The progressive jackpot is triggered randomly, by any wager, any coin value. However, the odds of winning are proportional to the bet amount, So, the more you bet, the more you add to the combined jackpot and the higher your chances of winning all the gold of Greece!